The Legend of the Butterphant 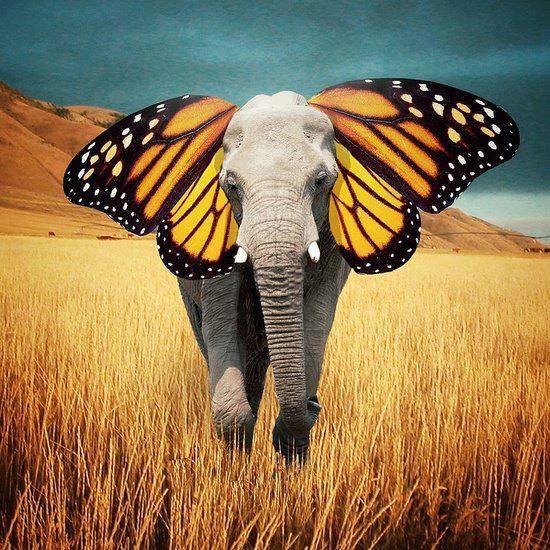 The Legend of the Butterphant

The sun is coming down on the Nilgiri Hills. The red jungle flames glow in the late rays of the burning sphere. Soon it will be dark.

The villagers take shelter in their huts. They have locked their animals and prayed that the Gods will spare them. The women are long gone.

It’s been 12 years they have been dreading this period of the year. The Neelakurinji has started to blossom and the mountains are as blue as the skies. Early, way too early.The horizons are far and unknown and this troubles the wise men of Bandipur.

The flowers are unusually beautiful this year. They are deep blue and grow  in generous bunches like decorating the savanna jungle with sacrifice garlands. Soon the wild creature of the forest will attack.

The legend has it that, years back, on the place where the village lies, there used to be a marsh. The animals of the wild would come here to drink. Tigers, elephants, leopards, buffaloes, deer and hundreds of thousands of birds would come calm their thirst at the bed of the river. Butterflies would find their trees  to witness the miracle of life when turning into cocoons. By the time they hatched, the swamp would become a whirlpool of flapping wings on a deep blue background as this was the exact moment when the Neelakurinji would be in full bloom.

A huge elephant would then suddenly come out from between the trees when the light prepares itself to hand over the rumor of the day to the silence of the dark.

He would always come alone and wait for his turn to drink in. The other beasts would instinctively fade away from his sight. Standing tall, watching the sun go down, he seemed a still stone shadow in the sunset. For some strange reason butterflies would make circles around him when the sun would appear  to touch the ridge of the mountains. They would then disappear as mysteriously as they arrived. The elephant would lift his trunk and salute the night falling down on the plain at the feet of the hills. He would then walk back to the heart of the jungle never to be seen again for years.

Year by year more peasants were drawn to this beautiful rich and peaceful corner of paradise. They were cautious as they had been taught so by generations of ancestors living close to the jungle. Though they were never bothered by the wild. They would lose one or two goats or maybe one cow every now and then to the pray animals, but they would be thankful for having been spared their lives. They lived in harmony with the world around them, careful not to awaken the dark spirits of the forest. They would also see the elephant by the bed of the river from time to time. They would treat him like the real king of the turf. They would not cross his way. They would respect his majesty by keeping the distance and trying not to disturb him.They would thank the Gods for the harvest they could bring up on his land and would leave part of it by the river for the elephant to eat.

And then, one extremely dry year, the villagers came to the river to water their animals. It was the blue flower time. That precise day when the hills become blue and the butterflies take a bow for the elephant. The men did not see him coming from behind the bushes. Scared to death, they tried to frighten him by making noise and shouting as hard as they could. The elephant seemed not to bother. He continued his slow walk towards the dried river. Branches were cracking underneath his heavy paws. He would move his head to the sides,he would shake his ears. He would trumpet his trunk and then freeze. He would wait for the butterflies to come.

The butterflies did not show up. Never again.

The elephant was gone that day.

And, at night, when all the souls were safely resting inside their small houses at the border of the jungle, a dreading sound would be heard. The elephant attacked smashing to the ground everything he encountered. Some say that he had tears in his eyes. Others remember that he was frantically hitting with his head all that seemed to  hold their cottages up. Afraid for their lives the men would attempt to scare him away with fire crackers, the women would grab the children and desert the place taking refuge in the jungle, the old would beg for forgiveness.

At dawn the maddening chaos would end. The sun would bring silence about. The elephant would leave.

Years from the first attack, the people of the mountains forgot about it. The survivors of the horrific night would recall the terror when, gathered by the fire, they would tell their children stories about one insane elephant.

16 years later, when the hills would become blue and the  butterflies would not come by the river, the elephant would fiercely attack again and again. Every 16 years.

Anand was born during the night of the last outburst of the terrible creature. He was but a little child when he heard the story for the first time. When he turned 6 he decided he would heal the elephant. He was certain that the animal was in pain and that he suffered for the loss of his butterflies. The elephant could not talk, nor could he explain that he missed his butterfly friends, that was why the beast would go insane with grief whenever he was reminded of that beautiful moment of the year. Elephants do not forget, nor do they forgive.

So Anand started to draw a plan. He would make the butterflies come back to the river! He had 10 years ahead of him. He did not tell a living soul what he was about to do. Instead, he would quest the wise men of the village about butterflies. He would ask his mom to carry him with her to the nearest town and allow him to sneak inside the rudimentary library the time she would buy her groceries.

The next year he would search the jungle and would bring earth  and animal droppings together, he would mix them and build a small  island by the river. One year further he would bring seeds of flowers and bushes and accommodate them on the small muddy limb. The third year the first butterflies returned. Shyly. They would fly over, stop for a second on the petals of the flowers and leave.

From the shadows of the trees Anand was enjoying the result of his efforts. Within a few years, the butterflies would be back forever, he thought. He did not have to deal with the elephant yet. He stood up and approached the heap by the water. A few butterflies were still playing above his head.

The sun was coming down on the Nilgiri. The red jungle flame flower was glowing  in the late rays of light. It would turn dark soon.

The villagers took shelter in their huts. They have locked their animals and prayed that the Gods will spare them. The women are long gone by now.

The next morning the mountains were blue. Deep blue. Anand rushed to the river. Clouds of multicolored butterflies were flying in circles over his island. Amazed by the view he turned his face towards the village, placed his hands by his mouth willing to call his father whom he had left puzzled by the porch. He froze. He dropped his hands down and became silent.

The elephant passed over the threshold of the forest. He walked slowly towards the river. The butterflies welcome him. A billow of flapping fragile wings enveloped his body .

For seconds Anand couldn’t make a move. He almost stopped breathing at the sight. His father, who had come to the rescue of his son, stopped mesmerized by the view.

The elephant lifted his trunk and trumpeted as nobody had heard him for years. He had tears in his eyes.

As quickly as they surrounded the elephant, the butterflies disappeared. They left their iridescent colors behind.

The Butterphant returned to his home wearing butterfly ears. He never returned to bother the villagers.

The legend says that Anand lived long and happily ever after and told the legend of the Butterphant to all who wanted to hear it.

It is the blue time in the Nilgiri. The peasants are gathered by the fire…