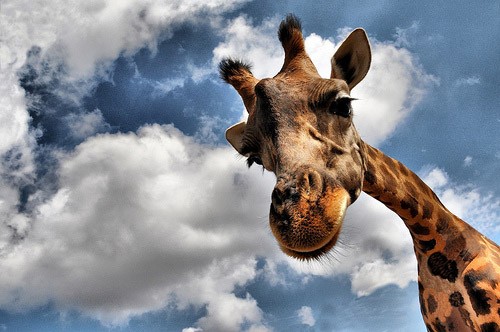 It appears nowadays that each species of the animal ‘regnum’ on Earth has a specific strategy when confronted with fancying-hunting- defending situations.

Dolphins are famous for their amazing planning of coaxing hunting attacks on poor helpless small fish. Ants are also renowned for their internal organization and defense techniques. Wolves attack in pack.

But the strategy of the giraffe is to be considered as well, especially in those contexts where size and weight and height are considered as certain advantages.

Now, this giraffe I am speaking about is not even aware of her natural skills she inherited from her ancestors to serve her in order to be able to put down even the most fearful opponent.

Well, she doesn’t have such a counterpart to start with, to be honest.  But, if it happened that she had to use her knowledge to knock down her adversary, this is what she would do:

Nothing reaching higher than her ankle is worth considering. Snakes are the exception of the rule. Should it happen that she stepped on the head of one of them, she would first rule it out, then kick it before the snake even realized what was about to happen to him.

Literally. She would stretch her long, beautifully  long neck. She would bring her legs together.  Cross them possibly. She would then straighten her horns and ears and freeze. She would make sure that her posture would impress you. Not convinced? Then she would hit the ground with one or her hooves and would mark the pose. Now you can bet the reference spots on her legs are way out of your sight.

Gently, don’t threaten your balance. Any sudden move can be fatal at heights. Her aim is to impress, not to press you flat with her 2 tons of graciously falling body! She would move her head once to one side and then to the other. She would lower her head by a few centimeters. Not sure. She’s higher than you anyways. In attitude and inches. That’s all!

This is a crucial step in her strategy as it ensures a clearer view on the enemy – if there’s one around worthy of her interest– in a rotated perspective. She would do this facing it, and would ensure that her message is clear: I do see you! I watch your every move!

Chew on your cheeks!

Not too hard. It has to look like you’re pensive. She would not appear menacing, just concerned with how she would project you against the next tree in view, some 150m away, to the North. This buys her time to think about her next step. If you know your interest you play along. It’s a question of perception: she’s about to decimate you and yet, you’ll be so convinced she is trying to seduce you.

There’s one downside to all this…once high and tall… she cannot lower herself down, not even to drink. This makes her totally lose her head! And you’re a predator after all! It’s your duty to long for her nice colored patterned skin in tones that match the humor of your day.

Ladies, learn from the best: the giraffe. Play hard to get. If you decide to stop and have a look, stay tall and steady, on the highest hills you’ve ever come across and stand still. Swing your head to the sides, slowly. Allow your hair to caress your face while with eyes wide open, looking from the sides, you asses your adversary. Lick your lips and let him think you’re a genuine naive. Definitely refrain from drinking. This might be your legs-in-the –air -end.

Whatever strategy is better than no strategy.