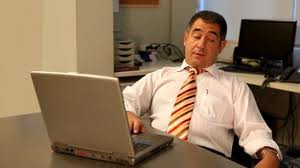 I work hard. I do my job thoroughly. I am result oriented and I enjoy the process along the way. I am an action person.” GB, air displacer at FWAD.

In case you don’t know who/what an ‘air displacer’ is, I suggest you to take a look around: he* usually sits quiet at his desk, glasses on, looking completely immerged in his job. He seems to be doing 1001 things at a time, and has the frown of a very concerned person. He tries hard to follow all the threads of his project to the last point on his imaginary mind map. He also has a plan. A rigorous one, known only by him. His table is under siege. Coffee cups and open water bottles from which he nervously takes a sip from time to time, with his eyes stuck to the screen. Absentmindedly, he searches for things to write on without taking his look away from the HD square in front of him. He curses between his teeth in a low voice, barely noticeable for the world around. He bangs the table from to time expressing his frustration towards the other ones in the office (or imaginary ones) as things do not run the way he’d have them run. He can never be disturbed. His colleagues have learned that by now. You do not talk to him, and you do not interrupt his work flow. He is constantly focused, the unplanned breaks harm his productivity. He stands up and stretches regularly – the quick guides of office work have taught him that he should do these movements every now and then. He gets out of the room every hour to freshen up – it’s also healthy (and sometimes he forgets to come back). He arranges and sorts piles of documents in a very specific order, just to reorganize them a few hours later or the next day. The geography of his desk is in continuous change. This is where his name comes from: he moves the air. He is really busy doing it. And, oh, so passionate about his mission.

If you spotted him and you have his name waving in your brains, it means that you already had your suspicions and never trusted them. By nature we assume the people around us would behave the same way we do – it really hurts to uncover the scheme behind the ‘air displacer’s’ behavior.

The air displacer is an incredibly good talker. You can actually see him in his non-action when you approach him with a problem to be solved. (When he expects you to do that). He will start rambling about everything and anything, looking away in a pensive mood, tapping on his chin, exploring his pockets, his nose in the air, head leaning slightly back, accompanying all this with ‘yeah, hmmm,  mmhhh, huh, errr” sounds that would make him look interesting and genuine. He will then conclude: “I will check it for you once I finish this (that)”, even though nobody asked him to check anything.

I am always fascinated by the ‘air displacers’ in the office. They exist everywhere, and they do a good job at it. They are in some sort the mascot of the team. They do nothing, they don’t harm, they don’t contribute… they just look amazed and convincing. Somehow they are tolerated and after having co-habited for a while, nobody asks himself the question anymore: “what the hell is he doing in my team?”. Moreover, you admire him for his skills in doing nothing. After all, it might be you the one who does not take his own job seriously.

How come you have time to read this when all around you are working hard? Are you an ‘air displacer’ by any chance?